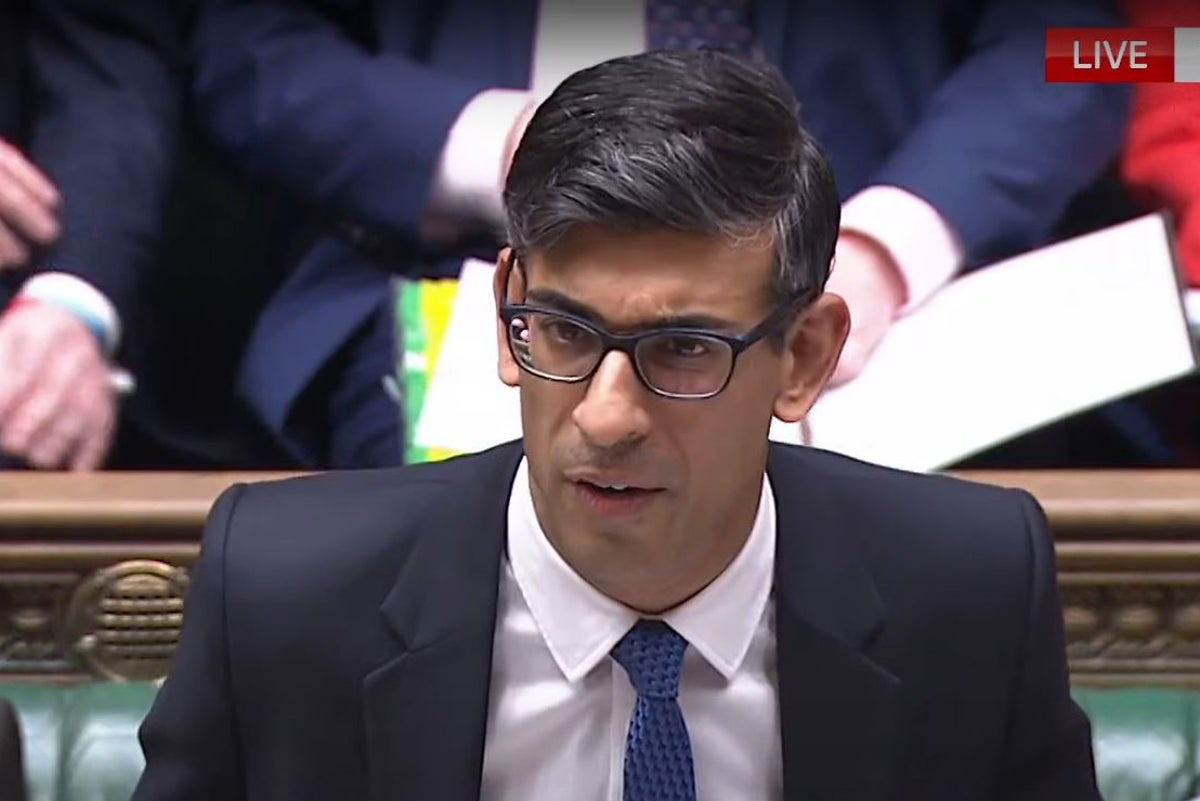 The Labor leader told the prime minister his failure to sack Mr Zahawi showed “how weak he is” and accused the PM of overseeing chaos and being “overwhelmed at every turn”.

Mr Sunak has suggested that sacking the Conservative Party chair would have been “politically expedient”, but insisted that “due process” meant an investigation into his tax affairs by his ethics adviser had to reach its conclusion. should be allowed.

The prime minister admitted he had not been given the full picture of the Tory chairman’s financial affairs when he told MPs last week that Mr Zahavi had given a “full” account of the estimated £4.8million bill he had settled with HMRC Was.

But he insisted that “no issue was raised with me” when he entered Number 10 and gave Mr Zahavi, who was not in the Commons for PMQs, the job of minister without portfolio.

He told BBC Radio 4’s Today program that if he were prime minister he would be “very tempted” to encourage her to step down.

On Tuesday night, former Attorney General Dominic Grieve told Newsnight: “If I were prime minister I would call Nadim Zahawi and I would ask him to please tell us exactly what has happened. Because there is no need for investigation in this. You have to tell me what it is.

“And unless Nadim Zahavi can make the case that some unfortunate mistake has been made in this matter which renders him completely innocent, it seems to me that after due exercise he should resign.”

But a Tory source said of Mr Zahavi this morning: “He is not resigning.

She said that his response was “hollow”, adding that “we need action now”.

Labor MP Tulip Siddique said: “Ministers have admitted they have no knowledge of the whereabouts of these children. So can I ask the Prime Minister: does he still think the UK is a safe haven for vulnerable children?”

Mr Sunak said the government was trying to end the use of the hotels, and added: “The United Kingdom has opened its hearts and homes to hundreds of thousands of people over the years … many children in asylums and provided sanctuary.” That process.

“But the reports we have read are concerning, local authorities have a statutory duty to protect all children, regardless of where they move from, and in that case they will liaise with local agencies including the police Let’s work together to find them.”

Sir Keir Starmer told the Commons that he spoke to the family of Zara Alina, who was murdered by Jordan McSweeney in June 2022, and said they have gone through anguish.

“He has accepted the findings of the report, does he also accept Zara’s family?” he asked the Prime Minister.

Rishi Sunak said that his “heart of course goes out to Zara’s family”, adding that the government has taken steps to address staff shortages and other issues in the Probation Service.

The prime minister said: “If we want to increase the safety of women and girls on our streets we need tougher punishment, and that is why this government passed the Police, Crime, Punishment and Courts Act, which she opposed and her party protested.

Hammersmith MP Andy Slaughter has taken up the case of Alireza Akbari, a British-Iranian who was hanged in Iran last week.

The former deputy Iranian defense minister was arrested in 2019 and convicted of spying for the UK, which he denies.

Mr Slaughter alleged the government had made “little effort” to protect him in the years before his execution.

“In the days before and after his assassination, the UK government made little effort to protect the life or death of a civilian,” he said.

He said the family wanted to hear from the government what sanctions they would impose on Iran “beyond the trivial steps taken so far” in the wake of the case.

Mr Sunak replied: “The regime is prolonging the family’s suffering and it’s deplorable disregard for basic human dignity. Iran must now explain the circumstances of his death and burial.”

He says that the UK government will keep the pressure on the government until the family gets an answer.

SNP: Zahavi tax case ‘a matter of integrity and accountability of the prime minister’

SNP Westminster leader Stephen Flynn said the issue of Nadeem Zahawi’s tax affairs was “now a matter of the Prime Minister’s own integrity and accountability”.

He said: “May I ask the Prime Minister what advice he would have for individuals looking to protect their personal finances? Should he seek out the future chair of the BBC to help secure an £800,000 loan?” “

“Should they set up a trust in Gibraltar and hope that HMRC simply won’t notice? Or should they do as others have done and simply apply for non-DOM status?”

Rishi Sunak replied: “I’m proud of this government’s record of supporting the most vulnerable in our society. Just helping all families this winter: £900 with their energy bills, the National Living Wage Raising the pension to record levels and making sure our pensioners get the support they need. That’s what this government is doing to ensure financial security in this country.”

Sir Keir accused Rishi Sunak of being too weak to sack Nadim Zahawi.

Sir Keir says: “His failure to sack him when the whole country is watching what is happening shows how weak he is. A prime minister overseeing chaos, overwhelmed at every turn.

“He can’t say when will the ambulances get the heart attack victims again. He can’t say when the prison system will make the streets safe again. Even he cannot deal with tax evaders in his cabinet. Is he starting to wonder if this job is too big for him?”

Sunak replied: “The difference between him and me is that I stick to my values ​​and principles even when it gets difficult.

“I resigned from the government when I fundamentally disagreed with the previous prime minister.

“But for four long years he sat next to the member for Islington North (Jeremy Corbyn) – when antisemitism became rife, when his predecessor sided with our opponents.

“That’s weak, Mr. President. They have no principles and only petty politics.

They say that last week, the PM told MPs that Zahavi had fully addressed his tax matters, but now says there are questions to be answered.

He asks: “What changed?”

Mr Sunak responds that over the last week the information had entered the public domain, and he believes in “due due process”, which is why he appointed an ethics consultant to investigate.

He accuses the opposition of “simple political opportunism” and says: “Everyone can see through that”.

Sunak: I can’t ‘predict’ the investigation into the Zahawi controversy

In an apparent reference to the Nadim Zahavi row, Sir Keir asks Mr Sunak: “Does the Prime Minister agree that any politician who evades taxes in this country does not deserve to be in charge of taxpayers’ money ?”

It is noteworthy that Mr. Zahavi is absent from the PMQs.

The Prime Minister replies: “The issues in question took place before I was Prime Minister. Normal appointment procedures were followed with regard to (Zahavi’s) appointment. No issues with me when he was appointed to his current role.” Raised

“And since I commented on the matter last week, more information has come to light. And that is why I have asked an independent consultant to look into the matter.

“I obviously can’t predict the outcome of that.”

Starmer asks if government’s hands are bloodied over parole failures

Labour’s Sir Keir says there are “systemic issues” in parole services, which are a ministerial responsibility.

Sunak replies that steps are being taken to implement new procedures for recalling offenders. He says it is already making a difference.

Sir Keir says parole services are failing across the country. “This is yet another important public service after thirteen years of the Tory government on its knees.”

He says he has spoken to Ms Alina’s family, who say the government has “blood on their hands”.

Mr Sunak replies: “We want to increase the safety of women and girls, we need tougher punishments. And that’s why this government passed the Police Crimes and Sentencing Act, which (Keir Starmer and Labour) opposed.

Labor’s first question relates to the case of Zara Alina, who was brutally attacked and murdered in East London. Her killer was allowed to roam the streets after failing probation, a shocking report has found.

He asks: “Does the prime minister accept those findings?”

Mr Sunak replies: “It is indeed a terrible crime … The failures were serious and unacceptable.”

He says that serious steps are being taken to address these concerns.