Author, nine, hopes to inspire others to ‘live in the power of their name’ 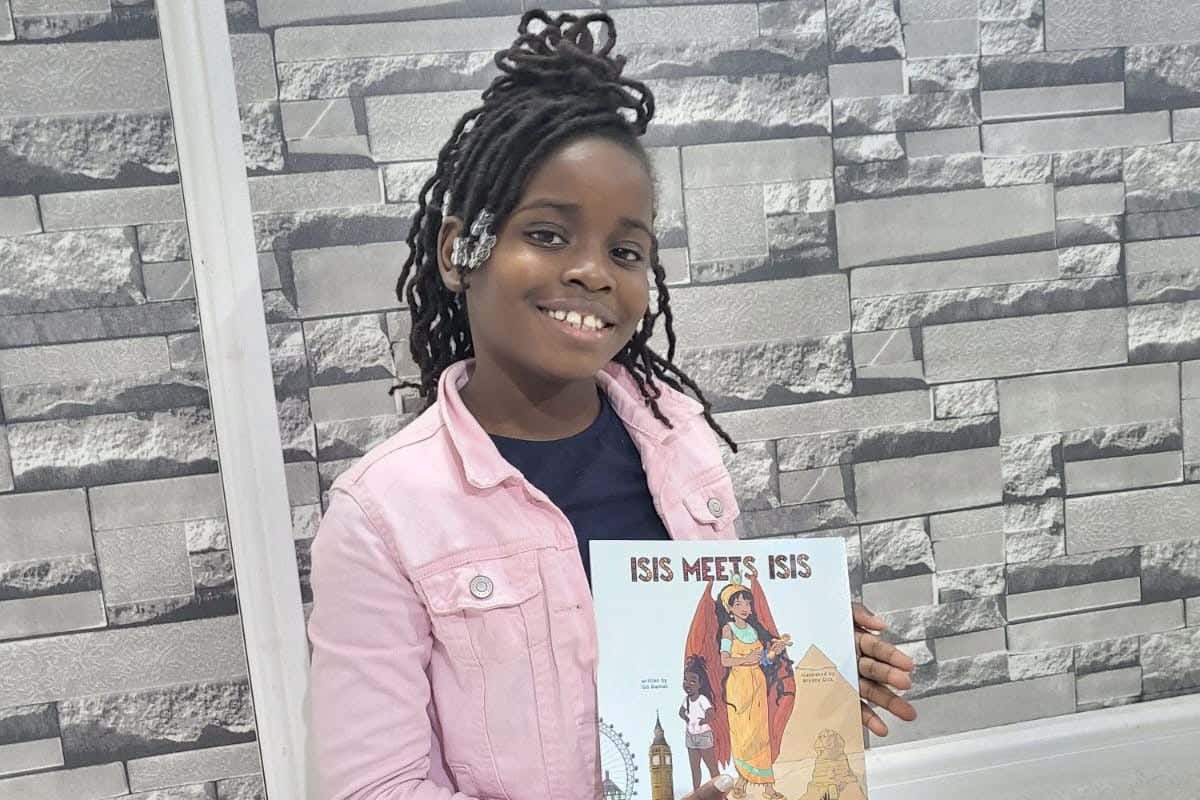 The nine-year-old author hopes her book will encourage others to “live in the power of your name” and celebrate being unique.

Isis Damali, who was just seven when she began writing her book Isis Meets Isis, told PA news agency she wanted to write a book that paid tribute to her namesake, whose roots are in ancient Egypt.

“My name is from the Egyptian goddess of the powers of life,” said the young writer from south-east London.

“I really like my name because it’s exotic and I love Egyptians and how they lived and wanted to write about it and share it with others.”

In the book, Isis traces back to ancient Egypt with a goddess who shares the same name as her.

Isis said she hopes the book will inspire others to share her love of ancient Egypt, as well as discover the beauty of her own name.

“I would like readers to be in the power of their names,” she said.

Isis advises young budding writers to “try and try again” when it comes to the writing process and stay positive about their work.

“Even if you write a book and it doesn’t get published, keep your work and know that you can try and try again,” she said.

“Think lots of positive thoughts about your work and know that it is special.

“People can write books at any age and I wish it was less surprising when young people write books.”

Isis’s grandmother Enomwayi Damali, whom she affectionately refers to as her Tan Tan (Trini for grandmother) and is also a writer, told PA that Isis used to constantly talk about her name, which made her think of her own name. Inspired granddaughter to write a book about it.

“She talked about how she loves her name, how special her name is, how unique her name is and I said to her, ‘Goodness Isis, why don’t you just write a book about it’, the 59-year-old said.

“Because she is named after an Egyptian goddess, she put the two together—the love of her name and her love of all things Egyptian—and she wrote this wonderful story.”

Ms Damali said that throughout the process Isis had a clear vision for her book and would not let others stand in the way of getting her book right, not even her Tan Tan.

“Isis wrote a draft a year ago and handed it over to me and I read it,” she said.

“And I had a comment about something coming at the end of the book and said, ‘Is that really what you meant to say?’

“And she was adamant that this was what she wanted in the story and they agreed that this comment – ​​it’s a really funny line – absolutely needed to stay.”

Daniela Blechner, founder of the publishing house Conscious Dreams Publishing, which published the book, said that the line – “She smelled kind of weird, like a pair of old shoots, but I felt safe with her” –” My favorite line was because authors often omit mention of the sense of smell in their descriptions but this vivid description really brought Isis to life and emphasized how old she was.

He also shared Ms. Damali’s sentiments about Isis’ clear stance on what her book would look like.

“Isis wrote her book herself and in such detail and she worked great with our illustrator Bryony Dick to make sure all the images were perfect and her vision was always so clear throughout the process,”43 The year-old, from West Norwood, south London, told PA.

“He’s just wonderful to work with.”

He said the young writer has started sharing her “pearls of wisdom” with the next generation of writers.

“We run storytelling workshops and Isis came on as a guest speaker,” she said.

“It was beautiful to hear her deliver pearls of wisdom in such a clear and expressive way and to see her confidence and inspiration in our other young up-and-coming writers.”

Ms Blechner said Isis’ 27-year-old mother, Subira Damali, initially approached her about publishing the book and said she had been really supportive of her daughter’s writing, commenting: “I feel very proud of my daughter. Proud.”

Even though this nine-year-old has already achieved an astonishing feat by publishing one book, she has no plans of slowing down any time soon.

“Perhaps the next book I will write will be about the gods in Egyptian times,” said Isis.

“I’m going to keep writing more because it feels really cool to have your name on a book and it feels like a part of you because it’s your creation.”

The paperback edition of Isis Meets Isis is out on 18 February, and signed copies can be pre-ordered and is also available on platforms such as Amazon and Waterstones.